M. Narauskas will meet Estonian star “the fight with a tough guy is waiting for me” 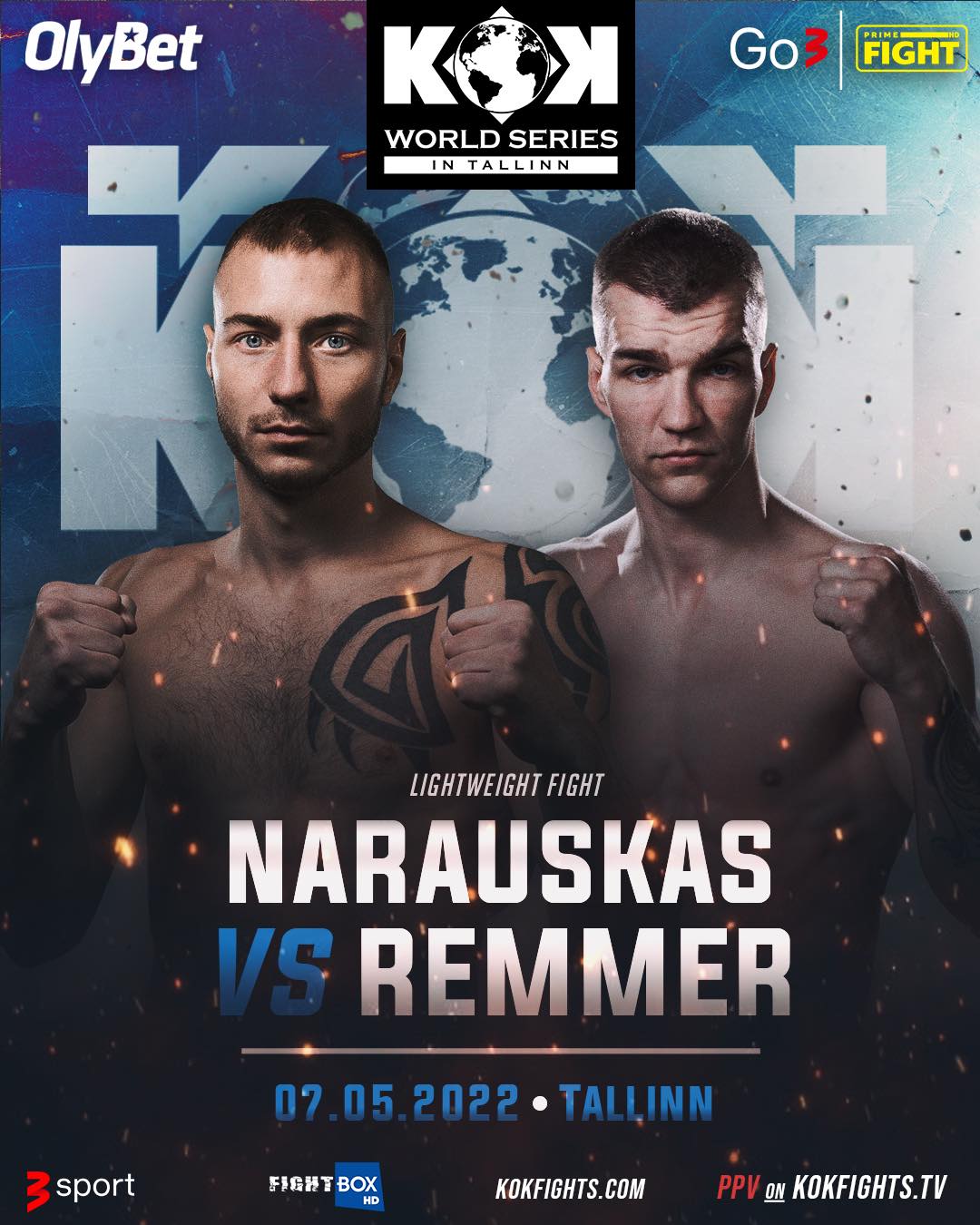 Estonian has already fought against Lithuanians – Arvydas Gerve and Martynas Jasiunas  both of them had to swallow the defeat pill.

“There will be what to do with him,” smiled M. Narauskas, who has already started preparations for the KOK’100 tournament at the Tondiraba Ice Arena in Tallinn.

Remmer entered the ring of “The League” tournament last week, where he met with experienced Croatian Teo Mikelic. Estonian dominated the ring and sent the Croatian to knockdown several times. After three rounds of fighting, the judges unanimously declared O. Remmer’s victory.

Last month M.Narauskas fought in the ring  – on March 19, he participated in the Grand Prix of  weight category up to 73 kilograms. In the semifinals, het met the same T. Mikelic, who was knocked out in the first round. However, in the final, M. Narauskas lost to Hubert Dylewski by the decision of the judges.

“There won’t be much time to prepare, but I am in a good mood,” Narauskas told sportas.lt. – We will work with coach Vaidas Valancius before the tournament and everything will be OK.  It’s hard to say what the fight will look like. It all depends on what tactics your opponent chooses. If he will try to impose a high pace, I will respond to him in the same way. If he wants to “come in”, we can. Everything will be decided in the first round. “If I work hard in the first round, I hope there won’t be a third round, because someone may fall.”

Speaking about the emotions that floods each time he remembers that he is a KOK champion, M. Narauskas laughs.

“All of my champion’s belts are on the trophy shelf – it’s always fun to look at them. I already had two belts, the third was always missing, so now everything looks great, said M. Narauskas, when asked if he was already used to the title of KOK champion. – I hope that the belt of the KOK champion will be maintained for as long as Henrik Viksraitis managed to do. There are definitely a lot of good fighters in my weight class, but the mood for the title fight is always different. Nobody wants to give up the belt. “

This time it is planned that M.Narauskas and O.Remmer will fight 3 rounds of 3 minutes each. This means that the Lithuanian does not risk losing the champion’s belt.

“I like to fight, that’s why I fight. Where would I like to improve myself? I always need more endurance, ”M. Narauskas blinked. – In fact, I do not know if I would like to be more resilient. I would like to increase the explosive force, the impact force. Endurance? The big secret is already here for me. It takes time. But my style… I always want to end the fight ahead of time. I tried to break through, I tried to do everything more calmly. But I don’t think it suites me. That’s why I want to focus on those places where I’m strong. “

M.Narauskas was a bit disappointed with his performance in the KOK Grand Prix – although the first fight was completed prematurely, the second failed.

“It was not what I expected.  I thought  Dylewski would be more tired. My thoughts did not take me in “that” direction, – said M. Narauskas. – I didn’t even warm up normal before the second fight. I went to the ring with the thought that “I will go home as winner”. But now I realize that nothing in life happens so easily. A mistake was made somewhere. There was a lack of right mind. I know that my next fight in Lithuania will be a rematch with H. Dylewski “.

O. Remer, H. Dylewski – there are already two surnames that M. Narauskas would like to win against. “There’s another name, but I don’t know if that fight will happen soon, because I want to meet the Belarusian-named  Dmitry Varac,” the  fighter, who has been fighting in the ring for almost a decade, recalled. – And more? Maybe someone wants to go back to my weight class? H.Viksraitis? Let it come back. I would fight. It would be unclear how the fight would end, but it would not be easy for him. “