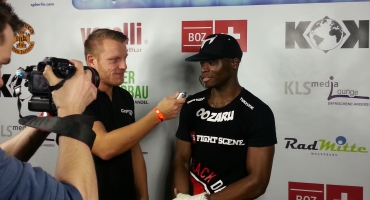 The KOK Elimination Tournament  ( -71 KG )  went down on November 23rd in Magdeburg Germany. It featured the most impressive Fightcard of the Last years in Germany. And all fights delivered what they promised, all Fighters showcased a breath taking performance. The last Man standing was the new Dutch sensation Chris Baya. He stormed through the Tournament as a last minute replacement for the Frenchman Steeve Valente. As late as Chris Baya entered the Tournament as quick he rallied to the win. He finished all of his three fights before the last bell and knocked out his opponents. Baya is the Man to watch, for the near future.

In the fight of the Night KOK Lightweight World Champion Denis Schneidmiller and William Diender Fought for the WKU World Title. Schneidmiller battled for 5 Rounds with the Dutch Fighting Machine William Diender. This fights showed all facettes KOK Fighters bring in to the Ring. Speed, Power, Athletism, Elegance, Drama and pure Emotions. Both fighters went to their Limit. The Audience was thankful with standing ovations. Schneidmiller won on Points and collected his second World Title in 2013.

Ukrainian Superstar  KOK World Champion Artur Kyshenko made short Business with his Syrian Opponent Baker Barakat. Within Round 1 Barakat was signed with two huge Cuts, that forced the doctor to stop the fight via Medical intervention.

It was a night of Thrilling Triumph for KOK and the Fighters. Magdeburg made the German Fans hungry for more.