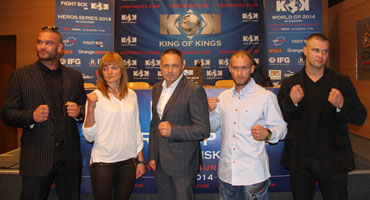 While there is only one month left until one of the biggest event in professional KickBoxing world – KOK WORLD GP 2014 IN GDANSK (2014.10.17), journalists were gathering into the press conference in Ergo Arena on September 16 th, where organizations presented the world famous KOK project.

The president of IBF (International Bushido Federation) Donatas Simanaitis, and tournament’s fighters such as world champion of Kick Boxing Kamila Balanda, Robert Maruszak, Michal Wlazlo and Piotr Kobylanski were invited to give a speech. The president of IBF Donatas Simanaitis was proud to say that one of the most popular of materials art are coming back after a 5 years break, this time for a good, as there are two great events coming up in Poland this year.

Fighter Kamila Balanda pointed our that she is happy for this amazing opportunity to represent her country in Poland and said that she is sure – she is going to show the winner spirit.

Spectators are going to see a fight between to fighters from Gdansk: Robert Maruszak vs Michal Wlazlo. This fight is being talked about mostly: Robert Maruszak was short as he assured being the strongest fighter”. Michal Wlazlo: “thanked for the chance to fight in KOK tournament and believed that the fight would reveal who is the stronger fighter, this is not MMA, you have to stand here till the end” – said Michal.

Piotr Kobylanski as the other fighters were thankful for being in the tournament and getting the possibility to fight between the strongest fighters, he assured that he is going to be in very good shape and will demonstrate an unforgettable fight.

The press conference revealed the final fight, the date of weighting.

After the press conference fighters posed for photographers, gave interviews .