Dawid Mirkowski: “I Will Do Everything I Need to Win the Fight” 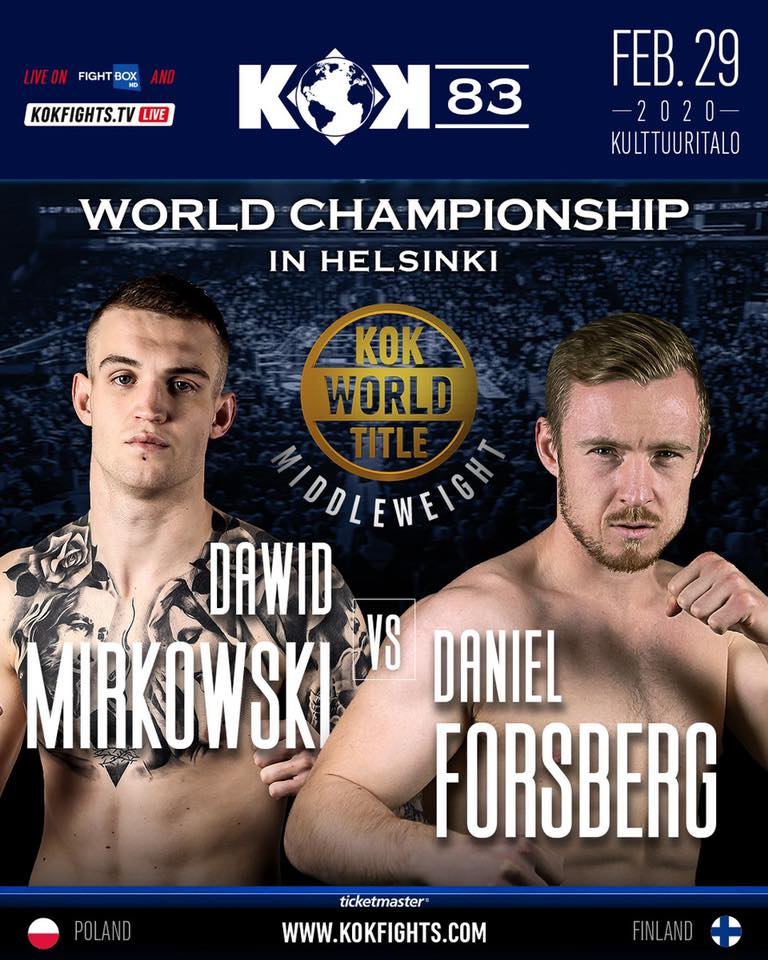 We caught up with top Polish fighter Dawid Mirkowski as he prepares for his 29 February bout at the KOK World Series in Helsinki.
Mirkowski challenges defending champion Daniel Forsberg for the KOK World Middleweight Title. It’s a huge opportunity for the young Polish contender, who fights out of the Garuda Muay Thai Gym in the capital city of Warsaw.
Mirkowski is trained by coach Dmitrij Kartel.
A former member of the Polish national Muay Thai team, Mirkowski took the time to discuss his start in the sport, his recent layoff, and the upcoming title bout with Forsberg, among other topics.
Interview by Pawel Sawicki, top Polish fight writer and former editor of Kickboxing Planet.
KickboxingZ: Hello Dawid! I am glad to talk with you. Please tell me about your beginning in kickboxing? How did you get started?
Dawid Mirkowski: Hello everybody! I want to admit that one of my dreams as a child was to train martial arts. I want to tell you the truth- I wanted to train striking. My parents enrolled me in judo classes but it was not what I wanted to do.
Then I moved with my family to one of the Warsaw districts called Marysin Wawerski, and Garuda Muay Thai gym was the closest fight school to my home. I was inspired by my colleagues from the neighborhood who told me about their fights, and I told myself that I must be like them.
KickboxingZ: You fought Robert Krason in April 2019. Why have you had almost a one- year layoff?
Dawid Mirkowski: I had no motivation to fight. I burned out. I was tired with my fights, trainings etc. I fought each month and my head and body needed a rest. Maybe it was too much for me.
There weren’t good offers also. I did not feel that I wanted to fight.
This feeling has returned now, I want to fight really bad. I did not lay on the couch in the living room, watching TV and eating chips. I was in training but I trained like a casual person, not an athlete.
KickboxingZ: Did you expect when you returned KOK would set you up in a title fight?
Dawid Mirkowski: I won all my fights in the KOK middleweight division, so I think I earned a title shot earlier. In my opinion, I should have fought for the KOK belt in May 2018 when I fought Artem Levin (Mirkowski lost by decision to former champion Levin). That was my peak as a fighter. I think it was a good moment there. Then I needed a rest, so that is why my title shot came for Helsinki event.
KickboxingZ: What can you tell (us) about KOK middleweight champion, Daniel Forsberg?
Dawid Mirkowski: I know him from KOK events, we fought on the same cards. I know his style. He is very tough fighter, southpaw, so I expect a very hard fight. It is always a problem when you fight a guy who has a southpaw stance.
I am very lucky because in Garuda we have some guys who can fight both orthodox and southpaw, so I am very confident about my training camp. I will be prepared for everything Forsberg can offer.
KickboxingZ: You are familiar with five round fights? Do You think it could be a factor?
Dawid Mirkowski: To be honest, I prefer five round fights. It’s plenty of time to work on my opponent. I could feel him better during the five rounds fight.
KickboxingZ: What does it mean to you to be fighting for the KOK World Title?
Dawid Mirkowski: I think my previous opponents were as good as Forsberg is. I earned the title shot, and I am glad that moment has finally come. I will do everything I need to win the fight and bring the belt to Poland.
It’s gonna be my second fight for a belt. I have fought for the belt in Germany, and I do not know what motivated the judges to give the victory for my opponent.
KickboxingZ: MMA is well known in Poland. There is a bare knuckle federation in Poland. Do you consider a transition to any other fight sports?
Dawid Mirkowski: I have a lot to accomplish in kickboxing. There are so many great fighters to fight. Maybe in the future I will do a transition but I am focused on kickboxing right now. You mentioned bare knuckle fighting. It’s an interesting option for a lot of fighters, and I watch this kind of event. It’s fun to watch and fun to fight under those rules too.
KickboxingZ: Do You have any idols or favourite fighters?
Dawid Mirkowski: Artem Levin. My former opponent is my best fighter to watch. He is a genius. I remember him from IFMA tournaments. He fought like an artist. I fought him and I feel the greatest.
His footwork was great-I could not handle it. He has an eye for kickboxing, he sees everything. And one more thing. He looks like fights do not exhaust him. He sets up punches and kicks very easily. It is not common but when you fight him, you get the impression he does not use any force when he throws a punch or kick. He is simply the best.
KickboxingZ: What are Your plans for 2020?
Dawid Mirkowski: I am hungry for the fights so I want to fight as often as possible. I think I could handle one fight per month. Maybe this year, I will come back to fight for the Polish Muay Thai team. We will see. First of all, I want to fight as many good opponents as possible, and that’s my priority.