Chico Kwasi: “I’m the Right Contender to Fight for the Title” 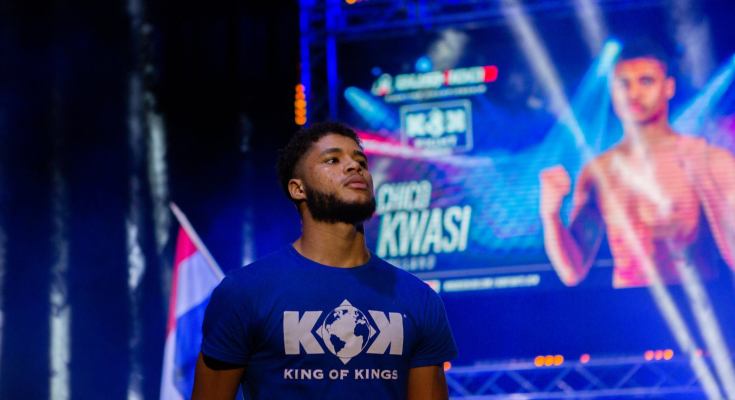 We caught up with Chico Kwasi, the talented young welterweight (77 kg) fighter from the legendary Mike’s Gym in Holland.

Chico had a big victory last weekend when he won the four-man Welterweight GP tournament at the KOK World Series 2019 in Germany event in Krefeld.

The 20-year-old scored an early stoppage of Mohamed Wade in the semifinals, then faced top German fighter Ekrem Doruk in the final.

Chico took the time to give us his thoughts on his tournament victories, fighting for the KOK title, and his background in kickboxing.

1)In your first tournament match, you stopped Mohamed Wade in the first round. Was it your plan to try and get a quick KO in the semifinals?

Chico Kwasi: It’s always my goal to win on a knock-out if it’s possible. But it just happens most times. My cardio has been so good lately so I didn’t really care what round it would happen. But if I smell blood, I go for it.

2)In the finals, you worked the body and showed your boxing skills.. I know you’ve done some pro boxing. Have you been focusing on your boxing more?

Chico Kwasi: I focused a little more on boxing lately, and it improved my fight style. And I plan to do more boxing matches in the future. Probably in January.

3)You’ve had a busy year fighting. I know you fought in Germany, Latvia, Estonia, other countries. Any plans for another match before 2020?

Chico Kwasi: I don’t have fights planned this year but I’m always ready. So if Mike asks me to fight the answer is always: YES.

4)You won the four-man GP Saturday. Constantino Nganga won last year’s welterweight GP. With the KOK title now vacant, are you looking to fight for the championship?

Chico Kwasi: Yeah, I think I’m the right contender to fight for the title. Doesn’t matter against who.

5)You’re only 20 years old. Can you tell us a little bit about how long you’ve been training and when you started fighting?

Chico Kwasi: I started training when I was 6 because I always liked fighting anime/cartoons, but it was nothing serious. I was the class clown and was kicked. When I got older, I started again. I got motivation from a lot of different animes. So when I was 15, I joined my brother (2018 Tatneft Cup Champion Fabio Kwasi) to Mike’s Gym.