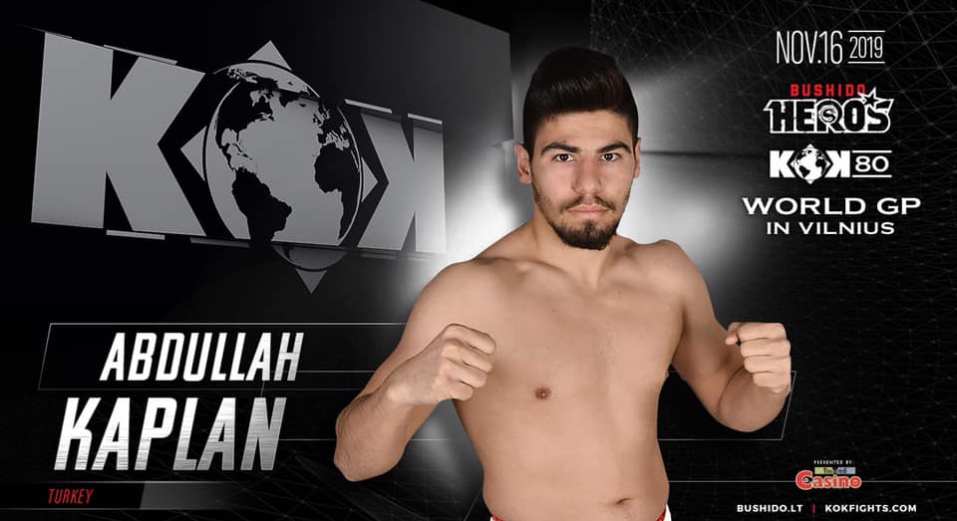 Rising Turkish fighter Abdullah Kaplan will meet reigning KOK World Lightweight Champion Henrikas Viksraitis in a three-round super fight on 16 November. The bout will be part of the massive KOK 80 event taking place at the Siemens Arena in Vilnius, Lithuania.
Kaplan, representing Team Erkan Varol, has quickly climbed the KOK contender ranks with four consecutive victories. In June, he defeated France’s Hirachidine Saindou on points, and followed with a decision over Murad Esedov a month later.
The KOK Fight Series tournament in August featured a lightweight tournament with four fighters competing for bigger opportunities. Kaplan stopped Ruslan Kulsahotov in two rounds and defeated fellow Turkish prospect Gokhan Sever on points to capture the tournament title.
He’s been rewarded with a great opportunity. He’ll face Viksraitis as part of the huge KOK 80 event, which celebrates 20 years of fight promotion. Thousands of fans will attend the event, with many more watching internationally on FightBox HD and the KOK Fights TV streaming platform.
Viksraitis is a top Lithuanian fighter coming off a successful title defense. At the KOK World Series 2019 in Kaunas in September, Viksraitis prevailed against countryman Mindaugas Narauskas by five-round unanimous decision to retain the belt for the first time.
If Kaplan can defeat the talented Lithuanian, he’ll establish himself as a top contender and likely earn a chance at the KOK World Lightweight Championship.