The Resurrection of the KOK Heavyweight Division 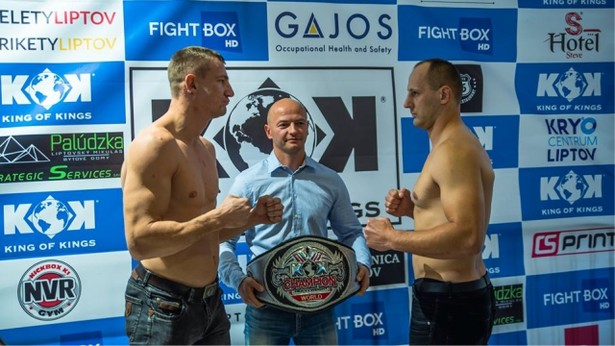 At one time time the King of Kings Heavyweight division was truly something to behold. In a sense, we could say that 2013 – 2016 were the golden years of the division. Fighters like Freddy Kemayo, Pavel Zhuravlev, Sebastian Ciobanu, Maxim Bolotov, Sergey Lashchenko, Julius Mocka, Vladimir Tok and many others electrified the KOK heavyweight division with many thrilling tournaments and fights.

The remainder of the tournament was held in Vilnius, Lithuania in November. Amazingly, all four semi-finalists were healthy and ready to fight. In the end, it was Lithuanian fighter Julius Mocka who walked out the winner, defeating both former KOK Heavyweight Champion Stepan Kyrlig and kickboxing veteran Tomas Hron in one night in his home country. Mocka would later go on to win the KOK Heavyweight Title one year later in an incredible fight with Vladimir Tok that ended up going two extra rounds. However, Mocka’s last fight would come in November of 2017 and with his exit from the promotion, the entire division soon faded away.

That is until earlier this year when rumors of an eight-man heavyweight tournament began to swirl around KOK. The first leg of the tournament was held in Sarajevo. The Baltic region seems to be a hotbed for heavyweight fighters at the moment. At the end of the night, it was Aleksandar Dimovski of North Macedonia who won the four-man WGP, stopping both of his opponents before the bell. This was also the night when Dzevad Poturak became the KOK European Champion, a belt that had been vacated by Zabit Samedov after he defeated Freddy Kemayo for the title in May of 2018 in Moscow.

After that, several attempts were made to organize the second half of the previously announced Heavyweight WGP, but for whatever reason the tournament never materialized. What we got instead was an Interim Heavyweight Championship fight four months later between Martin Pacas and Michal Turynski. Both men have had success in KOK before and are former multiple time world champions. Something seemed off with Turynski on this night. It might have had something to do with the fact that his coach had died just a few weeks earlier. Pacas won the fight by unanimous decision and is now slated to fight Dimovski to decide who will be the first KOK World Heavyweight Champion since 2017. The fight is expected to happen in the first half of 2020.

But it doesn’t stop there. The next challenger is already being groomed. The final stop for KOK in 2019 is Krefeld, Germany where the main event will feature a Heavyweight Contender’s match up when “The Serbian Bear” Sasa Pogulic takes on Holland’s Mohammed Daddouch. These two heavy-hitters will battle for the right to face whoever becomes the World Champion.

European Champion Dzevad Poturak also has the right to challenge the champion. In KOK the European Championship is considered a stepping stone title. It is a major step towards being considered for a World Title opportunity. Poturak last competed on November 16th in Vilnius in front of 11,000 fans and was victorious over Kirill Buller by TKO in a non-title bout when Buller did not come out for round two.

When will Pacas and Dimovski fight for the World Heavyweight Championship? Who will fight the winner? Will Poturak defend the European Championship? Where will we discover the next rising talents? These are fun questions to speculate about. It has certainly been a long time since the KOK Heavyweight division has been this exciting. I think 2020 will be a very compelling year in this division.