Porturak Ready to battle Dimkovski this Saturday at KOK Sarajevo 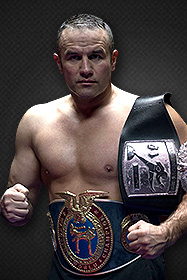 It’s a rubber match between the rivals. Poturak and Dimovski have met in the ring twice before with each fighter gaining a victory. The two veterans will battle for bragging rights in the Sarajevo ring.

We caught up with Poturak to discuss Saturday’s match and also his long and noteworthy career. The former world champion and current KOK Europe Heavyweight Champion has been competing for nearly two decades, and competed for K-1, KOK, It’s Showtime, and other top organisations.

Special thanks to KOK for helping arrange the interview.

Thank you for taking the time for this interview, hope all is well with you. This Saturday night you’ll be facing Nikola Dimovski at the KOK World Series 2020 in Sarajevo. What are your thoughts on the fight with Dimovski?

BH Machine:I fight against Nikola Dimkovski again. Two times, I fight against him. One time win, one time loss. He is big fighter with huge muscles. This fight is fight for decision (who’s better) I or Him🤣.

Not only are you fighting in the main event but you’re also the local promoter. How hard has it been to organize this event with the COVID-19 situation still going on?

Yes, I am a promoter, a fighter, a coach and someone who takes care of kickboxing. I have contact with all the big names in this sport. I want to be friends with everyone and do the right thing for kickboxing. I have been in sports for many years, over 30 years.

There are big problems with COVID but I will endure. The sport must live. We all have to do our best.

It seems you’ve been very serious in your preparations for Saturday. I follow you on social media, and I can’t remember ever seeing you in such great shape. Have you changed anything with your training or diet for the match with Dimovski?

I’m in good shape. I will add more gas, and I will be even better. I train hard as if I were 20 years old. I’m crazy about this sport and this kind of adrenaline. I would love to fight Freddy Kemayo, Rico Verhoeven, Pavel Zhuravlev. They are true warriors.

The first time I saw you, you were fighting in Japan for the legendary K-1 promotion around ten years ago. You were the first guy to really represent Bosnia internationally in kickboxing. Is there one moment in your career you’re most proud of?

It is precisely the moment of struggle in Tokyo that I am proud of. (Note: Poturak made his K-1 debut against Alistair Overeem in Japan in April 2010)

Rico Verhoeven, “The Red Scorpion” Alexey Ignashov, Daniel Ghita of Romania. Of all the great fighters you’ve fought, is there one you consider the best?

I won them and lost. I think Rico is now the most complete fighter with the most wins.

Almost 20 years as a professional fighter, you’ve fought in Las Vegas, Japan, Paris, Russia, Lithuania. All over the world. What keeps you motivated to keep stepping into the ring?

My struggles around the world have left their mark on me. It’s stronger than me. It’s an emotion. It’s adrenaline.

I know you are very busy with this week’s event. Thank you for your time, it’s an honor.