Matei vs. Viksraitis for the KOK Lightweight Championship 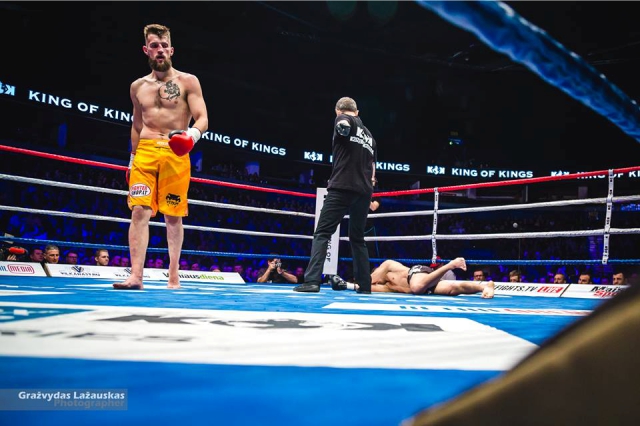 The lightweight division in King of Kings has a long and storied history with an impressive list of competitors. In 2019 the division now stands as KOK’s most competitive. However, two fighters stand out above all others and they will collide for the title this Saturday, March 16th in Vilnius, Lithuania.

Moldova’s Vitalie Matei has been competing in King of Kings since 2013. He has had his ups and downs over the years, but always shows up ready to fight. His rise to prominence started in Riga, Latvia in February of 2018 at the KOK WGP where he won the four-man tournament, defeating both Youssef Chaikh by decision and stopping Kamil Pawlak in the second round.

These wins set up a title opportunity against long-time champion and fellow countryman Dorel Cristian later that year. However, when October finally rolled around, Cristian was out with an injury and was replaced by Romania’s Andrei Leustean. Matei was victorious after five rounds in what he called the “biggest fight of his career”.

I was a bit concerned as events started to play out in 2018 between King of Kings and FEA (Fighting Entertainment Association). The two promotions have had a very close and successful partnership for many years, but in 2018 FEA began to split from KOK, establishing their own champions. At the moment, four of the five KOK champions hail from Moldova: Matei at Lightweight, Constantin Rusu at Welterweight, Stanislav Renita at Featherweight and Nadejda Cantir in the Women’s Strawweight division. But it seems that both promotions continue to be on good terms and the talent exchange will continue. Fighters will still defend their KOK championships both in Moldova during FEA events and in other countries under the KOK banner, despite the brand split.

Henrikas Viksraitis is a great example of hard work paying off. He has slowly but surely climbed the ladder of success in KOK’s most talented division over the past four years. Much like his opponent, he also won a World Grand Prix tournament, the KOK WGP in his hometown of Vilnius, Lithuania in November of 2017. However, in KOK, title opportunities can be given to either WGP winners or other fighters in the top of the division’s rankings.

So, the always sharply dressed Viksraitis kept doing what he does best, and that’s win. In fact, he’s already compiled twelve straight wins in KOK since his 2014 debut and shows no signs of slowing down yet. Perhaps the only other fighter with a longer undefeated streak in King of Kings is his teammate from the Sparta Fight Gym, current KOK Light Heavyweight Champion Sergej Maslobojev.

I had a chance to catch up with both fighters and get their thoughts going into this all-important championship fight. Below is what they had to say.

You have a KOK Lightweight Title fight coming up in Vilnius on 16.03.2019. How important is this fight for you?

For me this fight is very important, because it’s my belt already and I’m suposed to keep it.

Your opponent is someone who is 12 – 0 in KOK and the number one ranked Lightweight. What do you think about Henrikas Viksraitis as an opponent?

Yes I know my opponent, but his record is not so important for me. A title fight can’t be an easy fight !!!

Are you doing anything different in preparation for this fight?

This will be your first defense of the KOK title since winning it in October of 2018. How do you feel about defending the title in Lithuania in your opponent’s home town?

It’s time to defend my title and it’s not so important where or who my opponent is.

What message do you have for Henrikas Viksraitis before the fight?

I wish Henrikas a good preparation for the fight, best wishes and good luck, but the belt is mine !!!

You have a KOK Lightweight Title fight coming up in Vilnius on 16.03.2019. How important is this fight for you?

This fight is important to me because it’s the -71 kg weight division that I love. There is action and good fights all the time in this weight division. I am happy to have the opportunity to fight in front of all the spectators in my hometown of Vilnius at Siemens Arena. I can’t let down all these people and my fans.

Your opponent is a veteran fighter from Moldova, Vitalie Matei, who has fought many times for KOK. What do you think about Matei as an opponent?

Vitalie is a good and aggressive fighter. I have seen him at KOK fights and he is a veteran, but he has the KOK Lightweight belt and that means something. I respect him and I hope we will put on a good show.

Are you doing anything different in preparation for this fight?

I need more stamina for five rounds, but I am working hard all the time for my fights. That’s why I win.

You have fought many times before in your home city of Vilnius, Lithuania and you have developed a big fan following. Do you think it’s an advantage for you to fight there?

Fights in my hometown are special for me because I need to show them what I do best and yes, it’s an advantage because all those people are supporting me and it gives me strength all the time.

What message do you have for Vitalie Matei before the fight?

Only respect and I wish him good luck. I hope we make a great show at Siemens Arena.

You can watch the entire event this Saturday March 16th live on FightBox HD. The first part of the event, the “FightBox KOK Hero’s World Series” starts at 5:30 pm CET (6:30 pm local time in Lithuania) and the second part, the “KOK World Championship” is scheduled to begin at 9:00 pm CET (10:00 pm Lithuania). If you have the FightBox TV channel, you can watch that way, or through the streaming service at www.filmboxlive.com. To see the full fight card for the event, click here.

Also, don’t forget that there is still one more King of Kings event this month when KOK returns to Turkey on March 30th in Istanbul. Kickboxing legend Albert Kraus is headlining the card. There is also another KOK championship fight on the horizon when Raimonds Aukstikalnis faces Daniel Forsberg for the vacant KOK Middleweight Title on May 17th from Helsinki, Finland.