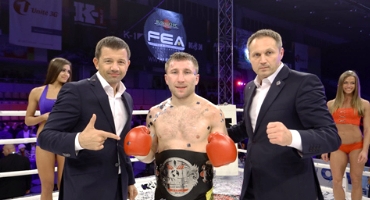 Again, without any doubt, the biggest project of martial arts in Europe “KOK WORLD GP 2013 IN CHISHINAU”  attracted a phenomenal success. The full arena of KOK fans have not been allowed to relax at least for a minute because of very tough fights.
Such intensity of the fights the fighters of 8 men GP managed to keep untill the final.
Final fight was no less dramatic: Cristian Dorel, KOK World champion of last year, was sent to the knockout by Denis Shnidmiler from Germany.
In one of the Event superfights Contantin Tutu after extra round defeated Dmitrij Sakuta.