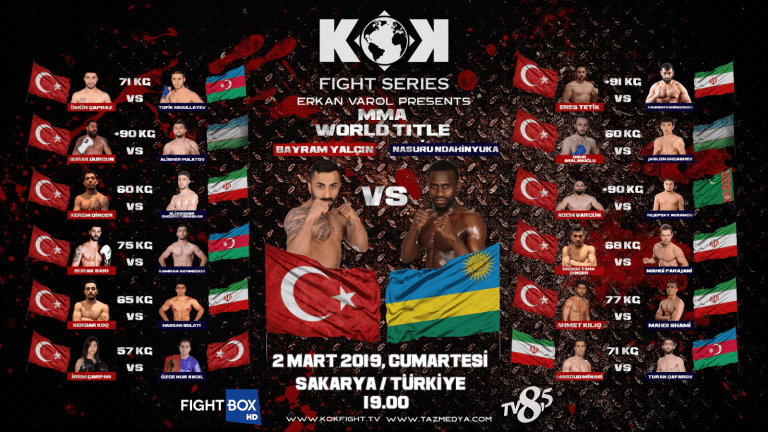 This coming Saturday March 2, King of Kings makes its first visit to Sakarya, Turkey. a fast-growing city on the Black Sea coast known for its natural beauty.

This is a unique event for the KOK organization.

Instead of KOK kickboxing rules (no elbows or sweeps), all bouts will be held under Muay Thai rules except the MMA title fight. Countries represented at the KOK World Series Sakarya include Azerbaijan, Iran, Turkey, Turkmenistan, and Uzbekistan.

KOK fans will recognize some familiar names on the fight card.

Irem Capar of Turkey is a 2017 IFMA Youth champion, and 2-1 inside the KOK ring. The 18-year-old Capar advanced to the final of the four-woman 60 kg KOK Istanbul tournament in December, but lost to fellow prospect Ilknur Kurt.

Tofik Abdullayev scored a big win in Istanbul in December when he knocked out South Africa’s Farshad Ambari in less than a minute.

Here is the fight card (subject to change).

The KOK Fight Series event in Sakarya will be broadcast on the FightBox HD channel beginning at 19:00 local Sakarya time (17:00 CET, 16:00 London, 1100 New York). The event is also available for pay-per-view purchase from the KOK Fights TV streaming platform-right now an early-bird price is listed for only $4.99 USD.