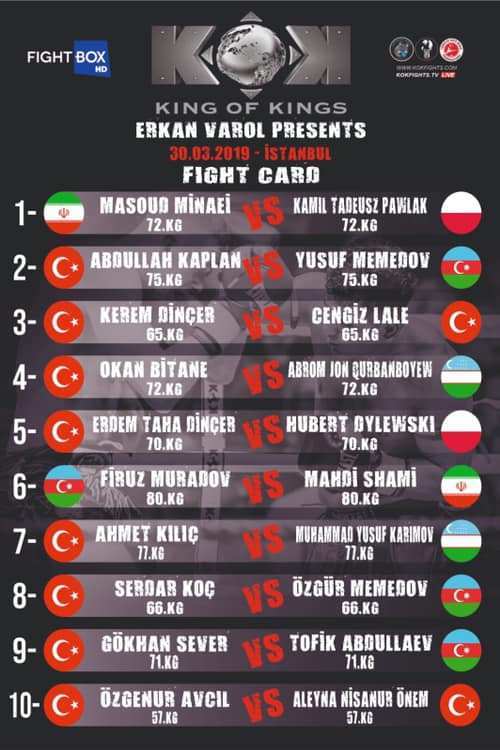 King of Kings and Erkan Varol brought the KOK World Series back to Istanbul Saturday.

Another Iranian fighter Mahdi Shami defeated Firuz Muradov in a bout that went to a fifth round-the judges determined the bout a draw after the first extra round.

-75 kg: Yusuf Memedov (Azerbaian) def. Abdullah Kaplan (Turkey)-Extra Round Decision (2-1)
Local favorite Memedov and Kaplan closed the show with a well-fought battle. Memedov got the vote after the extra round.

-72 kg: Masoud Minaei (Iran) def. Kamil Tadeusz Pawlak (Poland)-KO Round 2 (Body Kick)
Pawlak started the bout well, but Minaei started to take control later in the round. The Iranian fighter got through with a high kick late in the round. Pawlak was knocked down but beat the count. Early in round two, Minaei landed a clean kick to the body that dropped the Polish fighter. Pawlak didn’t beat the count, and Minaei got the win.

-57 kg: Ozge Nur Avcil (Turkey) def. Aleyna Nisanur Onem (Turkey)-TKO Round 1 (Could Not Continue)
Onem appeared to be hurt from a body shot, and Avcil followed up. The referee gave Onem an eight count, and she was unable to continue, giving Avcil the quick win.

Ahmet Kilinc (Turkey) def. Mohammad Yusuf Karimov (Uzbekistan)-TKO Round 1 (3 Knockdowns)
Kilinc improved to 12-0 with a first-round win over Karimov (20-4, 9 KOs). Kilinc was too much for the smaller Karimov, as he knocked down the veteran three times with punches to get the stoppage.

-80 kg: Mahdi Shami (Iran) def. Firuz Muradov (Azerbaijan)-KO (Injury)
The taller Shami (9-1) prevailed in the extra extra round (5th round) after Muradov couldn’t continue due to an arm injury. Shami did well early in the bout, but Muradov (5-4, 5 KOs) closed the gap and the bout went into extra rounds.

-65 kg: Cengiz Lale (Turkey) def. Kerem Dincer (Turkey)-Unanimous Decision
Lale (2-0, 1 KO) scored a knockdown in the first round with a one-two punch combination. Dincer (12-5, 7 KO) seemed to have the advantage in rounds two and three, but the judges scored the bout unanimously for Lale with the knockdown.

-67 kg: Serdar Koc (Turkey) def. Ozgur Memedov (Azerbaijan)-Unanimous Decision
Koc (5-0, 1 KO) took control of the bout in round two, as his pressure wore down the young Azerbaijani fighter. Koc mixed punches upstairs with low kicks nicely, and Memedov (4-1, 2 KOs) was given an eight count in round three.

Preliminaries
-65 kg: Umit Vurgun (Turkey) def. Kemal Han Bulut (Turkey)-TKO Round 1 (Injury)
Vurgun prevailed in the first round when Bulut was unable to continue because of a cut on his forehead.

Halil Ozisik (Turkey) def. Ozer Zengin (Turkey)-TKO 2 (Injury)
The card began with a match up between two young Turkish fighters. Zengin sustained an injury in round two and could not continue, giving Ozisik the win.