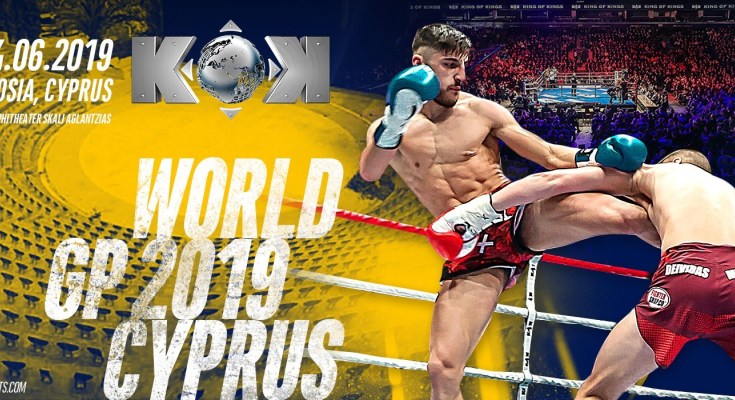 It was being billed as “The Hottest Event of the Summer”, and the action delivered inside the ring.

KOK returned to Cyprus for its annual summer event Friday, and the fight card was a knockout.

A large crowd inside the Skali Aglantzias Amphitheater in Nicosia and international viewing audience were treated to a night of hard-hitting action that featured back-and-forth battles, knockdowns, and knockouts.

Here are the results.

-67 kg: Levan Revazishvili (Cyprus) def. Maxim Branis (Israel)-Unanimous Decision
In the KOK World Series Nicosia 2019 main event, Revazishvili got the win over the crafty Branis. Revazishvili took the fight to the more-experienced Branis, and had the advantage early.

Branis fared better as the match continued. The Israeli used the push kick effectively, and seemed the sharper fighter in the last round as Revazishvili tired.

It was the first victory in three KOK matches for the fighter, who lives and trains in Cyprus but is originally from Georgia. In the post fight interview, Revazishvili said he looked for the knockout but “it doesn’t work out.”

“Very tough guy,” he said of Branis. “Congrats to both of us. Thank you very much.”

-67 kg: Delil Timourtourkah (Cyprus) def. Constantinos Serif (Greece)-TKO Round 1 (Knee to Body)
Timourtourkah assumed the role of aggressor from the opening bell. The bout was halted momentarily due to an accidental low blow from the Cyprus fighter.

Timourtourkah continued his pressure and mixed his techniques nicely, while Serif appeared to be wearing down. The Cypriot threw a couple of punches upstairs, then landed a left knee to the body that hurt Serif. The referee gave Serif an eight count, but Serif was still hurt and the bout was halted.

-71 kg: Sotiris Christodoulou (Cyprus) def. Andreas Mavropoulos (Greece)-Split Decision
Christodoulou seemed fortunate to get the win against Mavropoulos. The Greek fighter patiently applied pressure to Christodoulou, and seemed to get the better of the exchanges. Christodoulou landed a few good shots, but he was knocked down by a body kick in round one and mainly fought off the back foot. Christodoulos improves to 10-1 with the victory. Mavropoulos is now 11-5.

-67 kg: Dimitris Papadopoulos (Greece) def. Itsko Angelov (Bulgaria)-KO Round 1 (Left Hook to the Body)
The action started quickly, and Papadopoulos dropped Angelov. After Angelov got up, Papadopoulos soon ended the battle with a well-placed left hook to the body. Papadopoulos improves to 10-2. Angelov suffered his first loss to slip to 4-1.

-77 kg: Loukas Trifonos (Cyprus) def. Nicolas Constantinou (Cyprus)-Unanimous Decision
Constantinou and Trifonos, both national champions according to FightBox commentator Daniel Austin, battled back and forth early. Both men were stunned by punches in round one.

Trifonos started to score with the body kick in round two, and landed at least a half dozen cleanly. Constantinou took a deep breath late in the round and appeared fatigued, but kept coming forward. In round three, Constantinou continued to pressure, but Trifonos got the better of the action and won the decision unanimously.

-51 kg (Muay Thai Rules): Stefanos Sotiriou (Cyprus) def. Ron Batbao (Israel)-TKO Round 2
Sotiriou closed the FightBox KOK Hero’s Series portion of the event in exciting fashion with a second round TKO of previously unbeaten Batbao. Early in round two, Sotirou caught Batbao with a solid right hand that dropped the Israeli. Batbao arose, only to be knocked down with another right moments later.

Sotirou continued his attack, and a knee upstairs dropped Batbao for the third time to force the stoppage. Sotiriou improves to 9-0 with the victory. Batbao’s record is now 8-1.

-70 kg (Muay Thai): Ruslan Fradkin (Israel) def. Stefanos Londou (Cyprus)-Unanimous Decision
Fradkin worked the low kick effectively to earn the unanimous decision. By the later part of the fight, Londou’s lead leg was bruised and his movement was affected. Londou was able to connect with some elbows during the match, but more damage was caused by Fradkin’s low kick attack.
Fradkin’s record is now 15-6. Londou is now 6-4.

Alkhadi started quickly, and almost knocked Davdson down in the first round. Davdson weathered the storm, and started to come forward. Both fighters landed clean punches and body kicks. Alkhadi blocked and countered with left hooks effectively. Davdson absorbed some good shots but still applied pressure. Alkhadi won the decision in a crowd-pleasing contest to improve to 12-4. Davdson is now 5-3.

-50 kg (Muay Thai): Sveta Pozidou (Cyprus) def. Vasiliki Frangostefaniki (Greece)-Unanimous Decision
The bout got off to a fast start, as Frangostefaniki looked to land the elbow and the fighters locked up. Pozidou started to find the range with her punches, and established control.

Pozidou was able to catch Frangostefaniki with some good punches as the Greek fighter came forward. Late in the third, Pozidou was cut by what seemed to be an elbow, but it wasn’t enough to change the tide of the fight. Pozidou is now 4-2. Frangostefaniki slips to 4-6.

Prelims
Koullis Achilleos (Cyprus) def. Christos Athinodorou (Cyprus)-Unanimous Decision
In a surprise, Achilleos prevailed by unanimous decision over Athinodorou in the opener. It appeared the taller Athinodorou had gotten the better of the action in the second and third rounds. Achilleos improves to 3-2 with the win. Athinodorou is now 3-2.