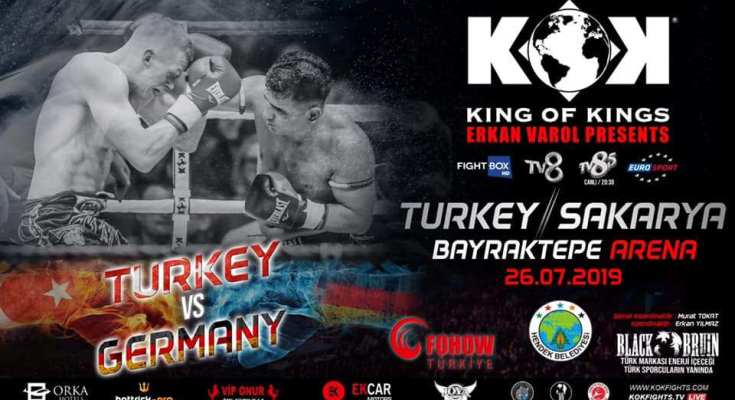 After a great night of action in Sarajevo, Bosnia and Herzegovina last week, the KOK World Series returns to Turkey on 26 July.

Once again, the venue will be the Bayraktepe Arena in the city of Sakarya, where large crowds gather to cheer on the Turkish fighters.

Top Turkish fighter and KOK Turkey Representative Erkan Varol released the poster for the event, and the fight card will feature a Turkey vs Germany challenge.

The last KOK World Series in Turkey event featured a Turkey vs France challenge. The Turkish fighters defeated their French opponents in every match on the broadcast. In the fight card’s main event, Masoud Minaei of Iran defeated Kevin Hessling of the Netherlands by first-round knockout in a WKU Europe Title bout.

Fans can watch the KOK: Turkey vs Germany event on the FightBox HD channel, and the event is also being streamed worldwide on the KOK Fights TV streaming platform. Full fight card when it becomes available.

KOK Germany Venue Named
In other KOK news, the organization announced the venue for its return to Germany on 30 November.

The KOK World Series in Germany event will be held at the Yayla Arena in the city of Krefeld, which is 19 km (12 miles) north of Dusseldorf.

The arena hosts music and comedy concerts, and is also home to the Krefeld Penguins of the Deutsche Eishockey Liga (German Ice Hockey League).

The Krefeld event is the first KOK event in Germany since the organization held a show in Magdeburg in 2013.

August Event Added
After the 26 July event, KOK will return to Turkey the following month on 16 August. The date was officially announced last week during the KOK World Series event in Sarajevo.

The 16 August event will be the fifth for the organization in Turkey this year, and the next month KOK begins its fall season with a big show on 21 September at the Zalgirio Arena in Kaunas, Lithuania.