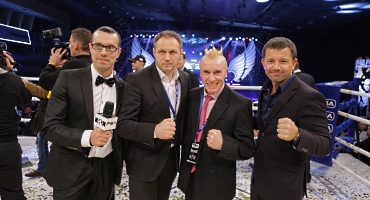 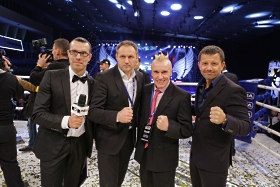 Yes 2013 was A Very Busy Year Both in the UK With My Own Full Time Muay Thai Boxing Gym,

My Fighters also Doing Many Shows outside the UK in Eastern Europe and the World, Plus The KOK King Of Kings Last 4 Shows in 2013.

– What do you think about KOK tournaments?

Carear, And I must Say I was Very Impressed With the KOK King Of Kings

Shows / Events, as they are Very Professionally run, Very Exciting, and Everyone is Looked after.

– How do you think, are the KOK fights tense and intriguing enough?

Definitely KOK fights Action Is Fast, Exciting and Great Matchmaking, which to me and the Fight

– What would you like to say to KOK fans whole over the world?

to All the King Of Kings Fans All over the World, A BIG Thankyou for Supporting These Great Shows / Events which are Spectacular, and you should tell your family and friends to watch and support too !

–  What kind of the fights do you like to comment on more – fights of the new rising “stars” kickboxing fighters, which are fighting to proove that they are worth to take the place between the best of the best, or the fights of the world known names veterans?

To me Personally ? I LIKE All the Fights especially when they are a good match / contest ! and KOK Promoter/s are Very Good at Matchmaking, this is very Important to Everyone, from the Fighters, their Coach / trainers, Fight Fans and Everyone Involved in these Events !

– In 2014 you will be commenting KOK tournaments again, how do you think, shall we see a lot of intriguing fights next year?

Well 2013 was a Great year for KOK Fights / Events / Shows, and Iam Again Excited to Be part of King of Kings as a Commentator to be able to Not Only Watch and Witness these Fantastic Spectacular Fights But be able to Speak to the Fight Fans and the World How I see and what

I can say about them ! iam Looking Forward to the KOK Brand Getting Even BIGGER