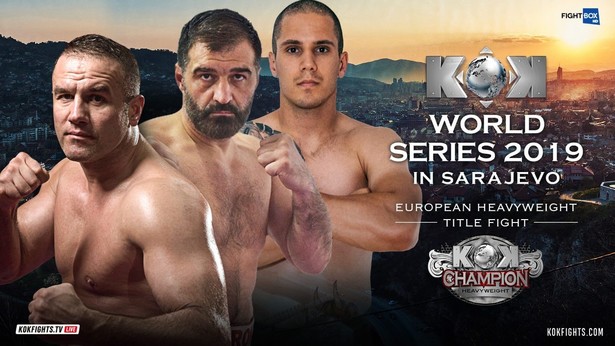 FightBox is proud to announce that King of Kings, one of the most recognizable brands of kickboxing, will return to live action from Sarajevo, Bosnia and Herzegovina on Wednesday July 3rd 2019 starting at 7:00 pm CEST.

KOK makes their debut in the country of Bosnia and Herzegovina for the promotion’s ninth big event of the year. The main attraction of the evening is a four-man Heavyweight WGP tournament. This is the first of two four-man tournaments scheduled to take place this year in KOK. The two winners will eventually square off to crown a new KOK champion and to decide who is the true King of Kings in the heavyweight division. In the first semi-final fight Alija Selmanovic of Montenegro faces Bosnia’s Sanid Imamovic. Then Slovenia’s Sasa Jovanovic takes on Aleksandr Dimovski of Macedonia.

Also on the card is Bosnia’s living legend of kickboxing and co-promoter of the event Dzevad “BH Machine”Poturak. In his long career, the 41 year old heavyweight holds victories over the likes of Daniel Ghita, Melvin Manhoef, Sergei Lascenko and others. He now faces the very tough Dritan Barjamaj with the KOK European Heavyweight Championship at stake. Primarily an MMA fighter, Barjamaj competed in one of the early Glory Kickboxing events and also holds a victory over Anderson “Braddock” Sliva. The full fight card for the evening can be found below.

King of Kings provides events of the very highest level by bringing together world class athletes and the most dedicated fans of combat sports to the largest arenas in the world. KOK has a wide fan base due to its nature, intensity and spontaneity and FightBox is the broadcasting associate for these series of events.