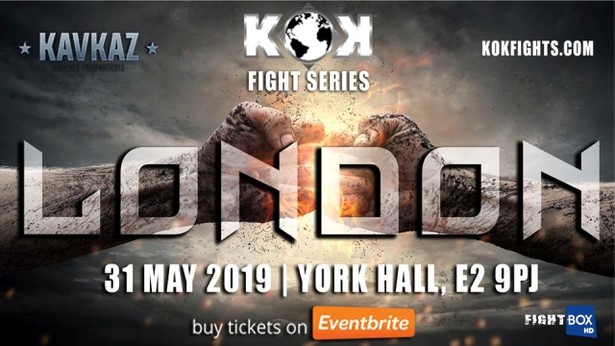 FightBox is proud to announce that King of Kings, one of the most recognizable brands of kickboxing, will return to live action from London, England on Friday May 31st 2019 starting at 7:00 pm CEST (6:00 pm local time).

King of Kings continues its 2019 world tour for what will be the promotion’s seventh big event of the year. This show will take place at the world famous York Hall which has hosted some of Britian’s biggest names in boxing. In the main event, Kevin Ward takes on Grzegorz Marko in a middleweight bout. Ward won a fight in Glory Kickboxing last summer and is the current ISKA World Champion. Marko is a former national champion in his home country of Poland and is hungry for victory in what will be one of he biggest opportunities of his career.

Also on the card is a -71 kg bout between Elkhan Aliyev of Azerbaijan and England’s Nathan Epps. One year ago in London Aliyev won the KOK Lightweight WGP tournament by stopping both his opponents in the first round. Epps has fought for many top promotions both abroad and in his homeland and is ready for the challenge and to climb the KOK rankings. “Elkhan has been training hard for this event. We are extremely happy that he is coming back agian to represent Azerbaijan on this year’s event.” said co-promoter Hafiz Bakhshaliyev in a recent interview. The full fight card can be found below.