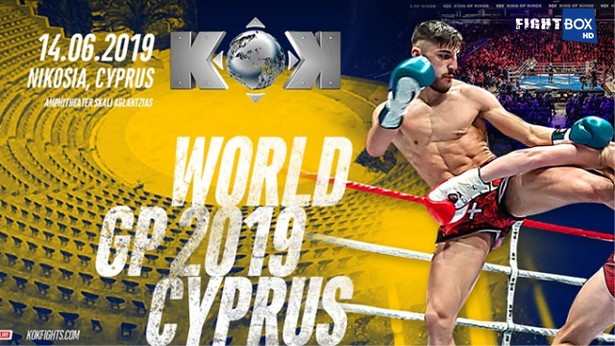 FightBox is proud to announce that King of Kings, one of the most recognizable brands of kickboxing, will return to live action from Nicosia, Cyprus on Friday June 14th 2019 starting at 7:00 pm CEST (8:00 pm local time).

KOK kicks off their summer tour in Cyprus for what is being called “The Hottest Event of the Summer”. This is the promotion’s eighth show of the year so far and their fourth time on the Mediterranean island nation. The event includes fights under both kickboxing and Muay Thai rules and is to be held in a very unique venue, the Skali Aglantzias outdoor arena, which is made of stone and resembles an ancient Greek amphitheatre.

In the main event, Levan Revazishvili, originally from Georgia returns to the KOK ring to take on Maxim Branis of Israel. Revazishvili is one of Cyprus’ most talented standup fighters. Last year he fought in the main event in what was one of the hardest-hitting fights of the evening and ended up going an extra round. He also fought last November in Lithuania against Deividas Michnevicius where he lost a narrow split decision. This time he faces Max Branis, a very talented stand up fighter who is also undefeated in professional MMA. The full fight card for the evening can be found below.