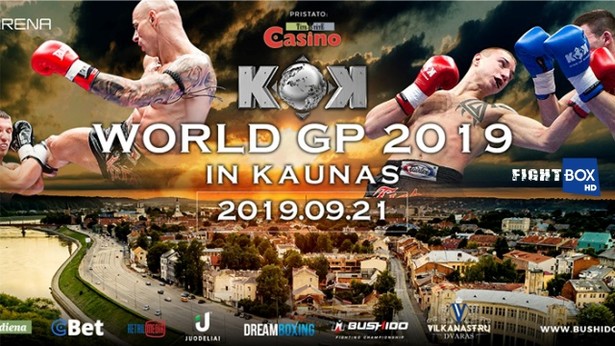 FightBox is proud to announce that King of Kings, one of the most recognizable brands in kickboxing, will return to live action from Kaunas, Lithuania on Saturday September 21st 2019 starting at 6:00 pm CEST (7:00 pm local time).

King of Kings is back in Lithuania, this time at the biggest arena in the Baltic States, Zalgirio Arena, in the city of Kaunas. A KOK Lightweight World Title fight headlines the event with champion Henrikas Viksraitis defending against challenger Mindaugas Narauskas. Over the summer Narauskas posted a video challenging his fellow countryman. Viksraitis accepted the challenge, but was disappointed that he has to fight someone again who he has already defeated. The two fought in the finals of the 2017 Lightweight WGP and Viksraitis won by unanimous decision. However, since then, Narauskas is undefeated in KOK and is currently ranked third in the Lightweight division. Viksraitis’ title victory in March of this year was not without controversy, either. He failed to make weight at the press conference and won an unconvincing split decision victory over former champion Vitalie Matei. Now the two will settle their score once and for all to decide who is the true King of Kings in the lightweight division.

Also on the card is a ladies MMA fight featuring former UFC fighter Julija Stoliarenko. She will face the challenge of Belarus’ Victoria Dvaraninovich. Stoliarenko has finished five of her last six opponents by armbar in the first round in what is very reminiscent of Ronda Rousey. Can she continue her streak in her home country? The full fight card can be found below.

In addition to the live worldwide broadcast on the FightBox TV channel in over 60 countries, the King of Kings coverage will also be available on-line to FilmBox Live subscribers at www.filmboxlive.com. Card is subject to change.