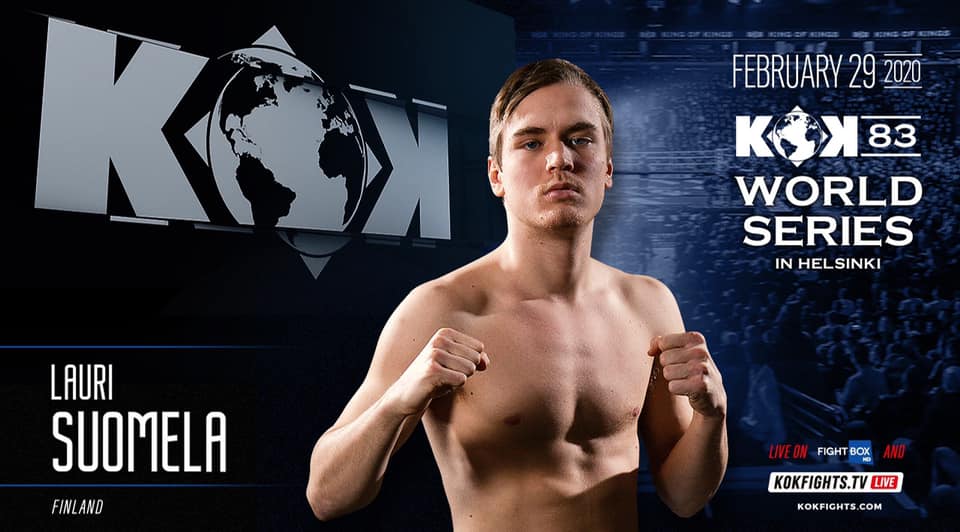 Featherweight contender Lauri Suomela is back in action at the KOK 83 event taking place on 29 February in Helsinki, Finland. KOK announced the news on social media.
Suomela is scheduled to face Hubert Dylewski, the ninth-ranked KOK featherweight representing the Garuda Muay Thai Gym in Warsaw, Poland.
Fighting out of Oumu, Finland, Suomela is the third-ranked contender in the 65 kg weight category. Nicknamed “The Pretty Boy”, he’s a three-time Finland national champion and was the featherweight tournament runner-up at last year’s KOK World Series in Helsinki event.
Suomela defeated tough Dariusz Skoczek in the semifinals by unanimous decision, but lost on points in the finals to tournament champion Pok Bill.
A win against Dylewski could make Suomela the next challenger for the winner of the fight between Pok and Igor Osinin. Pok and Osinin meet for the vacant KOK World Featherweight Title, also on 29 February at KOK 83.
Also announced for KOK 83 was Finnish lightweight Niko Korventaus. Korventaus fought to a draw with Lithuanian contender Mindaugas Narauskas at the massive KOK 80 event held in Vilnius, Lithuania in November.
KOK 83 takes place on 29 February at the historic Kulttuuritalo in Helsinki. Two world title fights are scheduled as well as a four-man contender tournament.
FightBox HD will broadcast the event live internationally, and KOK Fights TV will also stream the event worldwide.